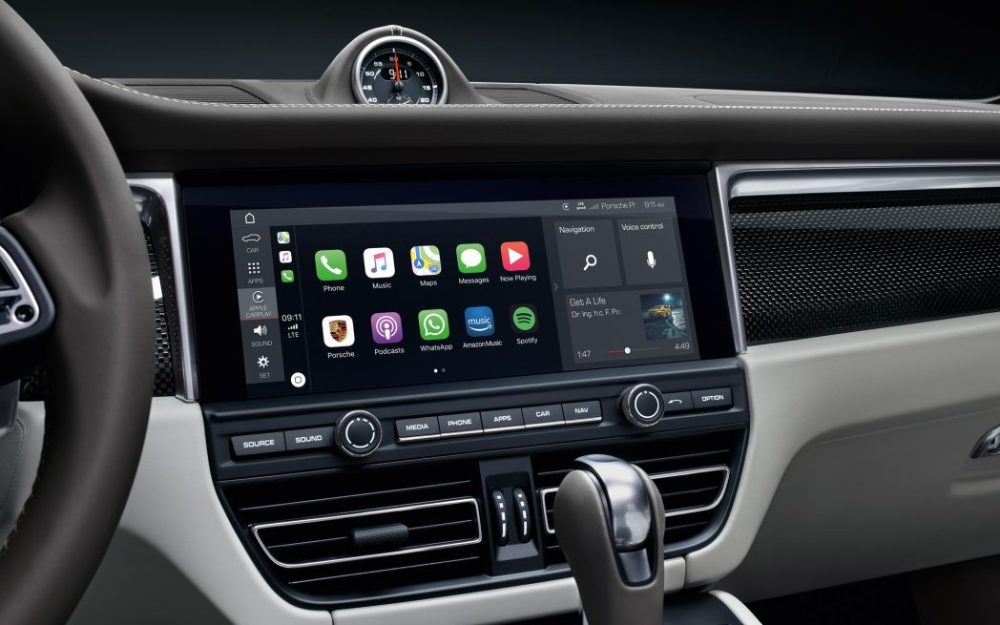 The main benefit of wireless ‌CarPlay‌ is a nearly seamless experience of having much of your phone’s core functionality available just a fingertip or voice command away on your car’s infotainment system while your phone remains in your pocket.

So far, wireless ‌CarPlay‌ support is largely limited to some premium brands, and Porsche is one of those brands that recently rolled out support for it.

For a taste of that experience, Porsche invited me down to Atlanta for a day to take a look at how wireless ‌CarPlay‌ works hand-in-hand with the native infotainment system on the 2019 Macan S crossover.

Porsche’s infotainment system is known as Porsche Communication Management (PCM), the Macan comes with a 10.9-inch widescreen infotainment display (PCM5 MH2p based), which allows for terrific integration between ‌CarPlay‌ and the tile-based PCM5 system.

With available built-in navigation capable of taking over nearly the entire widescreen display, you certainly get an expansive view of what’s around you. We are also proud to release the fullscreen CarPlay for the global market Porsche PCM5 vehicles.

While ‌CarPlay‌ is available on all Macan models, it is not a standard feature. ‌CarPlay‌ support is priced at $360 as a standalone option, or it’s available as part of several premium packages.

The 2019 Macan doesn’t offer wireless charging, but the recently launched 2020 model does include it as an option, allowing for an even more seamless experience. The wireless charger is included in an optional $690 smartphone compartment located in the center console, with the compartment also able to serve as an antenna booster for improved signal strength.

If you don’t opt for the wireless charger or just want to plug in your phone, you’ll have two available USB-A ports inside that center console. Two more USB-A charging ports are located on the rear of the console to serve passengers in the back.

Wired ‌CarPlay‌ is available across the Porsche lineup, and the company is working on rolling out wireless ‌CarPlay‌ on a number of its models as the infotainment systems get refreshed, and for the 2020 model year, the Macan, Taycan Turbo/Turbo S, and all 911 Carrera variants will offer wireless ‌CarPlay‌.

One of the major points of difficulty with ‌CarPlay‌ is frequently integration with a vehicle’s native infotainment system, as swapping between the two systems or seeing what’s going one while using the other one can be difficult, but Porsche has done a great job making multitasking across PCM and ‌CarPlay‌ nearly seamless. The widescreen display offers plenty of room to show a traditionally sized ‌CarPlay‌ screen while still giving you access to all sorts of menus and information tiles from PCM, all visible at the same time.

This is the best way to take advantage of widescreen displays with ‌CarPlay‌, rather than going to a wide fullscreen ‌CarPlay‌ interface that forces you to exit ‌CarPlay‌ in order to access native infotainment functions. On systems like this, whether both ‌CarPlay‌ and the native interface are available simultaneously, you can sometimes run into conflicts where certain native functions like phone and messages are unavailable because they’re currently being handled by ‌CarPlay‌.

Porsche Wireless ‌CarPlay‌ is an extra bonus that really needs to start trickling its way down beyond a small handful of luxury car manufacturers at this point. For short trips where you don’t need or want to bother plugging in your phone, it’s super convenient for ‌CarPlay‌ to simply pop up on the dash even with your phone still in your pocket. As per our experience, Porsche wireless CarPlay is subject to the system firmware version. Not All version software system will support the wireless CarPlay connection.

The one major downside with all of this is cost, and ‌CarPlay‌ doesn’t exactly come cheaply on the Macan. As noted above, ‌CarPlay‌ is a $360 option on its own, or it comes as part of some other packages. the CarPlay activation cost in the aftermarket cost $1500 which is only availabe on Porsche Macan 95B CarPlay activation code via Porsche PIWIS3 Tester tool. It may not make a huge amount of difference to luxury car buyers already laying out quite a bit of cash for their purchases, but the ability to have your phone’s functions and data conveniently accessible on your car’s dashboard is such a benefit that I can only hope we see a trend toward ‌Apple CarPlay‌ (and Android Auto) and enjoy the entire fullscreen CarPlay support being included standard on an increasing number of vehicles.

Previous Which Cars Offer Wireless Apple CarPlay or Android Auto for 2020? Next How Mercedes Benz C6 VCI is connected to Xentry Diagnostics

0 Comments for “Wireless CarPlay on the Porsche Macan S 2019”

Select the fields to be shown. Others will be hidden. Drag and drop to rearrange the order.
Click outside to hide the compare bar
Compare